SHELL or Masao Kimura is a power armour wielding superhero created by Fukujinzuke. The highly unique hero from Japan boasts no super powers other than those granted by his suit which he uses but never relies on. He also makes no secret of his true identity. He first appeared in Heroes Unite adventures as a hero who did not fight the super villains but instead stood by to save the citizens from collateral damage. Though he never appeared in an official HU issue he appeared in most of the Heroes Unite Adventures. His main comic SHELL has officially finished however he can still be found in the continuing adventures of the Heroes Alliance.

Masao Kimura was a physicist/Chemist living blissfully in Japan when disaster struck. After losing his wife and daughter as collateral damage in a meta human battle Masao made a vow to keep his fate from happening to others. Upgrading a suit of armour made of a rare Vollucite alloy with robotics and a repulser, Masao took on the title of SHELL; representing the shell he wore to protect himself. 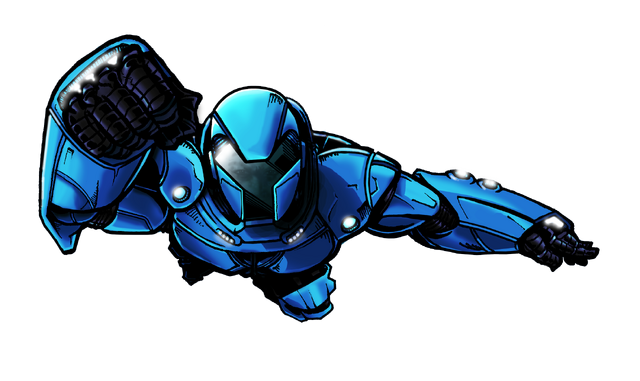 Though SHELL first started out as a hero who would let the meta humans fight among themselves only intervening to prevent civilians from getting hurt, his continued experience with Meta Humans soon made him realize a much bigger picture. The most prominent effect seen on this view is when a young reckless hero named Hightide who SHELL had butted heads with on many occassions sacrificed his life to save the HU commander from a Nano Nuclear Bomb. SHELL now works closely with the Heroes Unite Initiative and Heroes Alliance. In many ways he can appear as sort of a father figure; looking out for the new heroes and trying to train them to be more responsible future heroes.

SHELL is one of the early mentors of Nemesis, who would later become the powerful supervillain known as The Stormfront.

Masao is a tactical genius and willing to sacrifice himself to save others. His suit is made out of a near indestructable translucent alloy called Volucite and is armed with repulsers, lasers, robotic enhancements, scanners, rockets, and many other technological advancements. Although SHELL uses a wide variety of weapons and tech, he still relies mainly on his own intelligence often times even leaving the safety of his suit to take on enemies hand to hand

Retrieved from "https://huniverse.fandom.com/wiki/SHELL_(Character)?oldid=1833"
Community content is available under CC-BY-SA unless otherwise noted.